'Twas the Wine Before Christmas 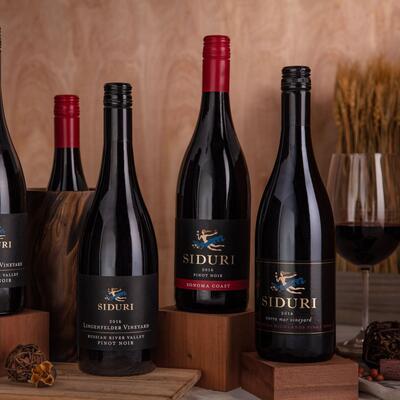 'Twas two weeks before Christmas, when all through the house
Every wine-lover was stirring, even the mouse;
The gifts were being ordered by email with care,
In hopes that our favorite Pinot would soon be there;
The children were nestled all snug in their beds;
While we opened up our favorite whites and reds;
And mamma with her Perry’s Ranch and I with my Van der Kamp,
Had just settled our glasses for a long winters nap,
When out in the vineyard there arose such a clatter,
I sprang from my lounge chair to see what was the matter.
Away from the cellar I flew like a flash,
Tore open the door and stroked my mustache,
The moon shining brightly on the frost laden vines,
Gave a luster of vintages past and the best of our wines,
When what to my wondering eyes did appear,
But a delivery truck full of Pinot and cheer,
With a little old driver so lively and quick,
I knew in a moment, it was our favorite delivery man dressed as St. Nick.
More rapid than harvest my wines they came,
And he whistled, and shouted and called them by name:
“Now, Barbieri! now, Zena! now Rosellas and Garys’!
On, John Sebastiano! on Hapgood! On, Pratt and Perrys!
To the top of the porch! To the top of their wine rack on the wall!
Now dash away! Dash away! Dash away all!
As leaves that before the wild hurricane fly,
When they meet with an obstacle, mount to the sky;
So up to the neighbors the drivers they flew,
With the box full of wine, and a St. Nick costume too—
And then in a twinkling, I heard on deck,
My other neighbor had come out to check,
As I drew in my head, and was turning around,
Down the porch he came with a bound,
Dressed in an ugly Christmas sweater and a Santa hat too,
He shouted what did you get, and whys that one blue?
Why it’s shipment of Siduri and their new Chardonnay,
It’s the first release, but it isn’t a stray,
As he looked on with wonder, I knew it was near.
Soon comes the ask to open my cheer,
Why yes of course, I did cry,
Let’s open one now, your ask is all I needed to justify,
The stump of a pipe he held tight in his teeth,
And the smoke, it encircled his head like a wreath;
Put that out and let’s go inside,
He shook his head yes and walked in with a stride,
He was chubby and plump, a right jolly old man,
And he laughed and giggled when I did hand,
My favorite libation, It’s Pinot Noir,
And asked, that Christmas sweater must have some good lore,
He spoke not a word, but went straight to his glass,
And filled his nose and turned with some sass,
And laying his finger aside of his nose,
And giving a nod, toward the chimney he rose,
He sprung to his feet and exclaimed with a cheer,
Where did you get this? I think I’m done with beer!
I told him Siduri, my favorite wine site,
And before I could stop him, I heard him exclaim as he drove out of sight,
I must go get some - Happy Christmas to all, and to all a good night!